Our final Vanderbilt appointment!
I can't believe we're done with the Fetal Clinic!

We had a great visit with all of the staff. The head nurse and the clinic coordinator always come to check in with us several times and catch up on the latest, especially while we're waiting in between appointments. They've become like family to us, which is such a special thing in healthcare!

Eliza was perfect for the ultrasound:
- Her growth is fabulous - better than average and at 6 1/2 pounds right now! Girlfriend already has chubby cheeks!
- Her ventricles seem to have stabilized at this point, which is great. (That's the area of the brain where the hydrocephalus originates). They've stayed about the same measurement for the last month. We hopefully won't see any changes until after she's born and has her back closure surgery. Then we'll see how they react again.
- Her movement is still great! Still moving those legs in some capacity, which is encouraging, though we don't know exactly what it will mean.
- Her lung development looks awesome. She's already doing a fabulous job breathing. Last night J.B. and I could actually see her breathing when we settled in for the night, which was strangely bizarre. Today we could see her breaths in and out on the ultrasound, so neat!


All in all, the fetal doctors were very pleased with her. I'm an exceptionally boring case to them, which is always great when you're talking to specialists, ha ha.

We also met with the chief of the neuro team today as well. Dr. Wellons reviewed all the updated information with us and we asked him no less than three thousand questions about the upcoming surgeries.
Her back closure surgery isn't actually scheduled yet since they want to wait until they know she's actually here (in case I go into labor early). But it will be completed within 72 hours of when she's arrived. The closure surgery/recovery should be the most evasive thing she'll deal with in the NICU. Because she has a larger spina bifida lesion, its likely they'll have to involve a plastic surgeon to make sure the nerves, muscles, and skin on the back are closed properly. This will also mean that the wound is more complicated and could take longer time in the NICU to heal. Baring any additional complications, we've been told to expect a stay of 2-3 weeks.
Dr. Wellons also reminded us that 80% of cases like Eliza do require some sort of shunt in the brain to help with the hydrocephalus, but we'll be waiting to see how she does her first few days here. There are so many unknowns about her closure surgery and potential shunt issues that they'll have to discover once we have a baby to actually look at on the outside!

Ultimately, it was an informative and boring appointment - always what we hope for. 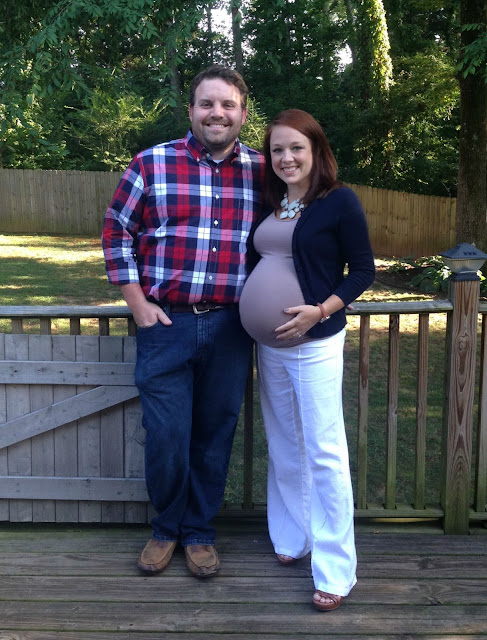 And less than three weeks until we meet our lady!
J.B. and I are both equal parts nervous and excited about what's to come. It's a lot to take in. A lot. And we know how difficult those first few days will be as both Eliza and I recover and J.B. is back and forth between us. I'm sure that its only the first of many challenges that we'll be ready to face head on!

For now, I'm feeling pretty great. And we're settling back and enjoying our last few weeks as a family of three!