Thursday was another long Vanderbilt day to check on our sweet gal. We're usually anxiously awaiting these appointments so we can find more and more information about her and hopefully plan for what's next. Little Miss certainly wasn't shy this week! 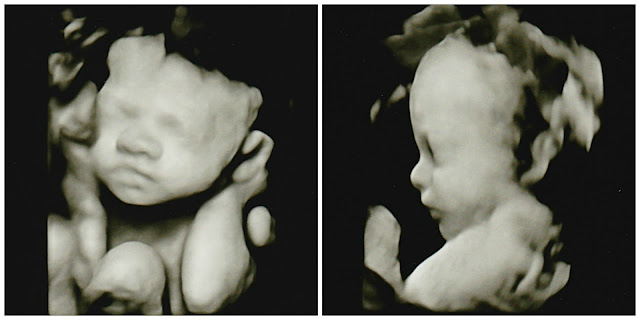 I'm always asked about any issues and what kind of movement I'm feeling. When I told them that she was a bucking bronco {moving even moreso than Jake did!} they gave me a bit of a side-eye, as if to say "you know your kid had spina bifida, right?" Yup, I'm fully aware. But I also know this gal is a mover and a shaker.
And sure enough, there it was right there on the ultrasound. She was squirming and wiggling, and, more importantly, kicking like crazy! The tech watched intently as she purposefully kicked here and there like it was no big deal. Later the doctor told us how shocked he was at this. Babies with a T12 lesion {which is pretty high for spina bifida} just don't move like that at this point in the pregnancy.  Modern medicine tells us that she shouldn't have any feeling from the waist down. By now their legs are basically immobile from the spinal damage. But the first rule of spina bifida is that there are no rules. Every case is its own story. So to see this kind of movement in Eliza was quite surprising, in the best kind of way. Hopefully her ability to kick like that reflects much better mobility than a typical T12 lesion would present, which would be amazing! And definitely super encouraging to this momma!

She's also looking pretty fabulous on growth.
{Those of you that have seen me lately are nodding because let's be honest... I'm a whale}
She's already topping three pounds and measuring in about the 75th percentile.


The other thing they're watching intently is the increase of hydrocephalus, or fluid in her brain. (to review: The spina bifida causes this condition by pulling down on the brain and causing areas of the cerebellum to shift downward, keeping the cerebral spinal fluid in the brain from draining properly). The best indication of this is for them to measure the size of the ventricle in her brain, which increase with the gathering of fluid. Right now, she has enlarged ventricles that are continuing to grow. At some point, she'll need a shunt placed in her brain to drain that fluid. Right now, we're watching those ventricle measurements to see if she'll be needing that shunt surgery immediately after birth, or if it will be put off for awhile. At this point, the doctors are leaning towards her getting a shunt right away, but that won't be decided until she's here.

For now, we're planning to deliver around mid-August. I have exactly 8 million appointments between now and then with all my fabulous doctors. I don't mind check in on her and seeing that sweet face some more. Can't wait to hold this little dear!
Posted by Sarah Wilder at 6:50 AM